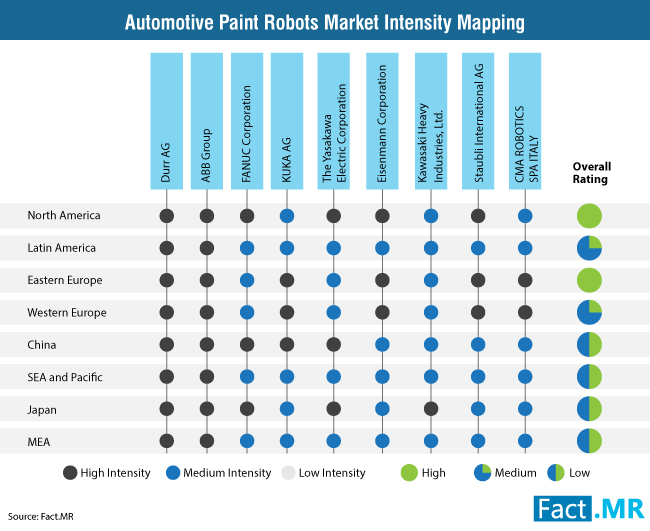 DUBLIN 2, Ireland, 08-Nov-2018 — /EPR INDUSTRIAL NEWS — Robotics in the automotive industry has been acclaimed as the impetus behind driving optimization and rethinking of production and process through innovative measures. Prospect of artificial intelligence is promising, with the ability to eliminate various inefficiencies in the automotive manufacturing, ranging from design and planning to maintenance and sales.

Robots have become increasingly palpable in supporting repetitive operations of car manufacturers, with the consensus that the robotics process automation (RPA) has translated into a proven technology, providing tangible benefits to automakers who deploy it. As in case of most technologies, with time, expenses linked with implementation and maintenance of RPA have diminished sharply – gaining significance as a manufacturing efficacy and capability enhancing option among small and large businesses alike.

A sample of the report is available upon request https://www.factmr.com/report/2232/automotive-paint-robots-market

Automotive paint robots are already a standard practice in the industry, wherein robotic arms spray bodywork – depriving the need for proficient manual painters and providing a more even, faster, and smoother finish. Automotive paint robot sales worldwide are foreseen to bring in revenues nearly US$ 700 Mn in 2018, recording a Y-o-Y growth of approximately 8%. Automotive paint robots have evolved over the years to become faster, lighter, and integrated with several activators and sensors.

Automotive industry continues to remain one of the largest and quickest adopters of the industrial robotics technology. Carmakers have huge plans for next-generation development of their factories, with smarter designs, collaborative robots and artificial intelligence emerging as secret ingredients to the flexible manufacturing – humans. For example – GM’s plant in Shanghai will soon produce electric vehicles with the aid of machines that work quietly in self-directed harmony.

Collaborative robots, or “cobots,” unrestrained by steel cages are being programmed in GM’s plant for working abreast humans on production lines – one unusual operation being handling installation of gears in transmissions. Automakers worldwide are embracing industry 4.0 and the concord alludes lesser intervention of humans. Focus is currently on improving efficiency and flexibility between humans and machines, while automakers concentrate on development of multiple models that are powered by electric motors or gas engines or both.

Most artificial intelligence systems and robotics are witnessing slow rate of adoption among leading players. For instance, Ford Motor Co has been reluctant to investing more on dedicated electric vehicle manufacturing unless there is consistent and sufficient demand for justifying the expense. Even Tesla, which long acclaimed implementation of robots to translate into an “alien dreadnought,” recently concluded at the fact that human intervention is underrated and excessive automation could involve more technical glitches.

Request methodology of the report at https://www.factmr.com/connectus/sample?flag=RM&rep_id=2232

Scarce skillset is a key challenge being addressed by the automotive industry when it comes to RPA-driven plants. This can be attributed partly to Millennials’ distaste for manufacturing work as robots steadily replace humans against the backdrop of pressures on automakers to reduce the overall vehicle cost.

The report is available for direct purchase at https://www.factmr.com/checkout/2232/S